Todd had a business trip so we decided to tag along.  He had to be there Thursday night, so I talked to the principals at both schools to find out what the policy was for excused absences.  They are allowed 5 per semester – just a written note from the parent.  I was quite surprised, but glad.

Friday while Todd went to his meetings, the kids and I went to the TN Aquarium It was awesome.  Chace and I had been there before, when he was much younger, but he didn’t remember much.  We started out in the Ocean Journey building, and the very first thing was an exhibit where you can touch stingrays.  So, of course they were both instantly soaked!  The kids were excited about touching them – I wasn’t so sure, and didn’t really want to do it, but Chace insisted.  I think the twins might have crawled inside the tanks with the stingrays if they could have.  In fact, Caeden was the first to almost dive in headfirst – he lost his footing on the slippery edge of the tank and went in all the way up to his shoulder.  His chin might have even dipped in.  A few minutes later, Lael did the same thing.  A few seconds later, I figured we better move on……Next up was the penguin exhibit.  I was shocked that some penguins grow as large as 44″ tall – That is bigger than Lael!!  One of the penguins pooped while we were standing there, which was by far the funniest thing the twins saw all day! 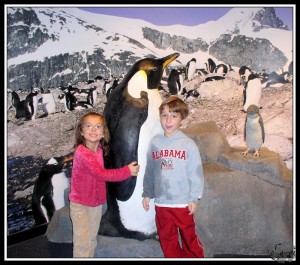 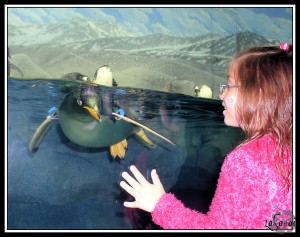 My favorite exhibit was the Butterfly Garden.  This was the coolest place – all soft harp music, waterfalls, exotic flowers and beautiful butterflies.  I was trying to get a picture of the various butterflies, by getting up close, then zooming in with the digital zoom on my camera.  I was about 2 ft. from one of the butterflies and it left the flower and landed on the tip of my finger holding the camera.  Very slowly, I moved my finger away to try to get a picture because I figured it would fly away at the slightest movement – but it didn’t.  It just sat there.  Lael and Caeden wanted to hold it, so I very carefully transferred it to Lael’s finger – the look of awe on her face says it all.  Caeden was quite impatient, and I was still sure that he would fly away at any moment, so I took it back from Lael, and transferred it to Caeden.  He was equally as awestruck as Lael.  We finally had to put him a flower after walking all around the exhibit with him. 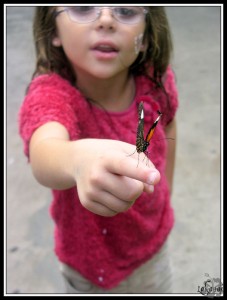 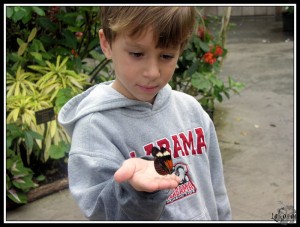 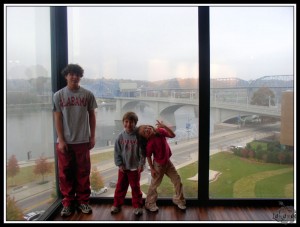 You’d think it would get easier to get a good picture of all 3 kids as they get older – but that doesn’t seem to be the case.  This picture was taken at a lobby like room on the top floor of the Aquarium.  We rode the what seemed like the world’s longest escalator to get there.  It was definitely the longest one I have ever been on.

Notice that Chace and Caeden are dressed alike.  I realized this as we got on the elevator at the hotel.  I said Oh, look Caeden.  You and Chace both have on grey Alabama shirts and red track pants.  How cute!!  Chace grimaced and tried to go back to the room to change – but too late!

Friday night we went to the Chattanooga Choo Choo. We ate dinner on the Silver City Dining Car, (pizza, which was good, but Chace declared the pieces were too small) The twins didn’t seem to notice we were on an actual train car, or else it just didn’t make that big of an impression. You can never tell what will get them excited.

We also toured the Model Railroad Museum, which Todd loved! :love You know how much he loves trains! I felt like I was in Mr. Rogers Neighborhood. 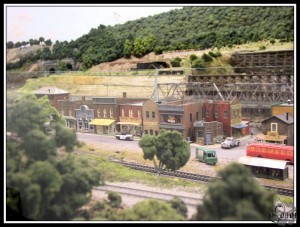 Saturday morning we woke up to fog and rain.  We had planned on going to Lookout Mtn, riding the Incline Railway and fun stuff outside but didn’t think that would be much fun wet.  So, we decided to just go to Ruby Falls.  I had been there as a child, many years ago, but I didn’t remember that it was a cave!  Oh well, just goes to show you that some things don’t make a big impression!  The kids really seemed to enjoy it.  They wanted to touch everything though, and that is a strict no-no inside the cave!  Lael kept asking if this was rock, or was this stone, or were we walking on the real cave floor, or cement etc etc etc.  At the end of the tour, Lael was checking out this obviously man-made stucco like support for a light fixture and wanted to know if it was plastic.  I said no, it’s not.  Apparently she did not like my answer or didn’t believe me.  Next thing I know, the tour guide asks if there are any questions.  Lael’s hand shoots up into the air.  The guide says yes, what is your question?  Lael walks over to the thing in question, kicks it and says “is this plastic?”  You could hear a pin drop in the cave along with a few snickers and muffled laughter.  The guide says no, ummmm, I think that may be stucco or cement.  funny, but a bit embarassing!