We’ve decided to go all in and plant a vegetable garden.  Lael got it started with her desire to plant herbs.  We went to Lowe’s and she started picking out herbs left and right.  She grabbed a couple of herbs that I had no idea what I would do with them like Spearmint and Chocolate Mint.  I had to reign her in a bit and guided her to choose nice, healthy herbs that I would actually use.  We got oregano, rosemary, basil, parsley and some lavender just because.  I decided to plant them in pots rather than in the ground.  I guess I got the bug to plant rather quickly and easily and I wanted to save the garden plot for vegetables.

After quite a bit of research I decided to go with the Square Foot Gardening method.  The premise of this method is you divide your garden plot into one foot square boxes and plant the veggies in the squares.  It will supposedly allow you to have a greater yield in a much smaller space.  Most square foot gardens are no more than 4 feet wide which worked well for me since I already had a space that was exactly 4 feet wide.  We had planted a garden 3-4 years ago but haven’t done anything with it since then.  It was seriously overgrown, I mean like totally out of control!  There was even a tree growing in the corner!  There was a huge bunch of waist high grass growing among some strawberries that somehow persevered and even multiplied over the years!  I wish I had taken a before picture, but trust me when I say it was bad!

Since the dimensions were already laid out, we just needed some support beams to shore up the construction.  The flimsy little 2×4’s we put in years ago did not do the trick.  Todd went to Lowe’s and got two 2x10x10’s and one 2x8x10.  Then he did what he does best – started an engineering feat that will probably survive the next big tornado.  He usually tends to over-engineer things he builds. 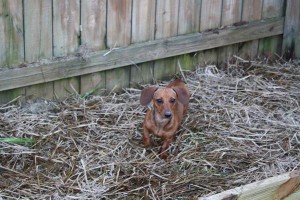 After Todd finished the building part, I covered the bottom of the left side of the garden plot with the grass clippings and weeds that I had pulled out of there earlier.  Then I covered all of that with a bunch of hay from our leftover hay bales from Halloween.  I didn’t do anything at all to the right side where the strawberries seemed to be thriving against all odds.  Emma was loving the new opportunity for new smells and digging.  She will definitely need a bath soon!