I have a friend who claims she isn’t crafty but I think ahe’s been holding out on me!  She threw a spectacular 50th birthday party for her sweet hubby.  Not only did she make ALL the scrumptious food but she also decorated like a crafty […]

Well, it took us a week to finally get our act together enough to have the birthday party we had planned for the puppies.  Lael asked me pretty much every day over the past week if we were having the party today……ok how about today? […]

Life at the Anderson's, Recipe Keepers 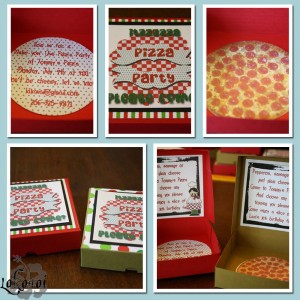 We are having a pizza party at Tommy’s Pizza to celebrate the twins birthday this year. I feel so fortunate that we are still able to get away with one party for them! I keep thinking that this will be the last year, that eventually they will want a ‘girl’ party and a ‘boy’ party, but so far so good. I think maybe that is because of my superior party planning skills! Tee-hee!! Just kidding, really I got lucky this year. Living Social had a great deal for a party a few months ago, so I asked if they wanted to do it and they both agreed. Hurrah! Easy peasy!

So, at Tommy’s Pizza they do all the work for you and it sounds like it is going to be a fabulous time! The twins are so excited! I made some cute pizza box invitations for the party with all the pertinent details. Take a look and let me know what you think!

If you would like to make your own pizza box it’s easy! I followed these super simple directions from Split Coast Stampers.

I also created a couple of downloadable files of my pizza box cover, party details and the pizzas themselves. Now you are ready to make your own pizza party invites! 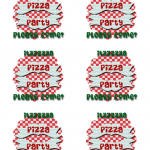 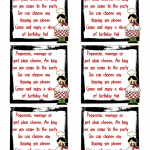 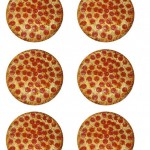 Now, this is the fun part!  The part of planning a party that I enjoy the most – the decorations.  Since this party was not at my house, nor at a friend’s house, I had to rein myself in a bit.  There is only so […]

Each month for our staff meeting a different group of teachers is responsible for bringing the food.  March was our month.  A few weeks ago we were called upon to turn our staff meeting into a ‘Granny Shower’ for our boss.  Oh sure, not a problem! […]

It’s that time again – Supper Club. This time Marcia was hosting and as usual we had lots of delicious food. I brought chicken & dressing and macaroni & cheese. Two of my favorite recipes! Aimee brought her new favorite dessert – Apple Dapple Cake. It is seriously yummy!! Here are the recipes if you are interested in trying them.
Macaroni & Cheese

Saute celery and onions in stick of butter.
Stir all ingredi`ents together. Add more or less broth to make it just moister than you want to eat it.
Bake at 350 for 40-50 minutes.

Mix all ingredients and bring to a boil. Cook for 3 minutes, stirring constantly. Pour over cake, let stand 2 hours.

The entertainment provided by the kids at Supper Club is always……entertaining!

It’s Halloween! My second favorite holiday behind Christmas!! Our next door neighbors hosted a Halloween party this year that was a lot of fun. There were so many cute Halloween foods, I had to take a picture of each to keep in my files for […] 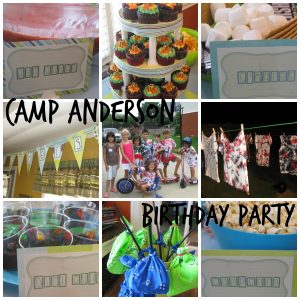 Whew, I pulled it off – Another fabulous combined birthday party!  I keep thinking that this will be the year that we will have to have two separate birthday parties.  I mean, really it’s amazing that I have been able to do it 8 years!  First year was a Beach Birthday Bash.  We had my parents, my in-laws, my SIL, my sister + her family and her in-laws all together in Gulf Shores.  It was amazing!  2nd year birthday was in Tuscaloosa at Jump Zone.  3rd year birthday was at Chuck E Cheese.  4th year birthday at Build a Bear.  5th year birthday supposed to be at Alabama Adventures, but got rained out and went bowling instead.  6th year birthday at the pool.  7th year birthday at Wilderness at the Smokies.  So, we’ve been lucky.  Lucky in that most of those parties didn’t involve lots of prep and pressure on me, the Party Queen!!!  No pressure actually, it’s just a bunch of 8 year olds, right?  Nine 8 year olds to be exact.  Spending the night, here in our back yard.  I revel in that kind of pressure, call me crazy if you wish.  I just want birthdays to be looked back on years in the future with fond memories!!

I spent the week before the party planning the food and decorations.  I can’t throw a party without a themed plan.  This one was obviously a camping theme.  The invitations were first up.  I made a tent with rolled flaps, the Camp Anderson title on it and then the pertinent details on the inside.  The funny part was when I was trying to write those pertinent details and get them perfectly spaced, I somehow left out the ‘E’ in Anderson.  Lael saw that and decided that she would write the pertinent details on her invitations.  I added a Camp Anderson banner to welcome everyone along with a Sign in station where the kids signed in with their real names, received their camp names, their flashlights, bandanas, cups and glow sticks.  Lael helped me with the camp names.  We had Laughing Striped Zebra, Running Wild Tiger etc.  Some of the kids really got into the names, others were not so thrilled with theirs!  Their flashlights and cups had their names on them and the plan was for them to use them all through the day/night.  That plan didn’t work out perfectly, but I tried!  Those were their party favors and I tied them up into the cutest little hobo packs for them to toss over their shoulder to take home.  The food consisted of Dirt Cups with gummy worms, Campcorn, Campfire cupcakes and Bug Juice.  They were not all that excited abut the Dirt Cups, I don’t know if it was the dirt or the worms that threw them off.  The Bug Juice though was gone as quick as lightning!

For the actual party, I started off by trying to think of things to keep them busy.  I came up with several group games that included a Relay Race through the Sleeping Bag Forest, Egg Spoon Race, Balloon Pop, Lifesaver Relay and a Silly String War.  You can guess which game was their favorite!!  Next I had to toss in a few crafty things, like tie-dyed t-shirts and Bottlecap necklaces.  I was surprised that the boys were into the necklaces!!  Both the boys and girls had equally dyed hands from making the t-shirts!

I also made them work for their dinner – we made Hobo Chicken.  They each made up their own foil packets of food and placed them on the fire.  It smelled delicious cooking.  We might have overestimated the time needed to cook though, some packets came out a bit scorched.  We ended the night by roasting marshmallows over the fire pit and NOT telling ghost stories.  The girls were in their tent all crowded up into a bunch, the boys were in their tent, nicely spaced out.  Apparently if you are an 8 year old boy you shouldn’t touch another boy at any point while sleeping.  Todd and I had our own tent.  Also surprising was the noise level in the boys tent was higher than the girls tent!  Go figure!  All in all, I think it was an amazing success.  I hope that Camp Anderson will be a birthday for them to remember.

I had been thinking about having a Hello Summer Party for a while.  My original plan was simple.  I wanted to paint a huge sign and stretch it between the mailboxes on our street that said something about School’s Out – Summer’s Here.  Then the […]

I did snap a few pictures, but the quality is not that great still.  I need to start a fund for a new camera!  Anyway, first up is the Altered Lunchbox I made for Catherine.  I still need to print the photos of all the […]