Christmas is on the way

This is prime shopping season for Christmas gifts. I decided to make a few crafty things for my booth that are specifically Christmas theme to add to what’s already there.

Family Fun on the 4th

Hybrid layout created with a digital kit called Independence made by Jen from Girl Boy Girl Designs.  This was from July 4th at the lake last year.

Instead of passing out on the sofa after eating Thanksgiving dinner, we went outside to try out some new cheerleading skills led by Myrisa, Maygan and Allie. Chace, Madeline, Mallory and Lael, the amateurs, were fast learners! There was plenty of other fun to be had too, football, backhandsprings, cartwheels and general play!

We spent Easter weekend at the lake this  year.  It was really nice just to hang out with the family, not worry about getting all dressed up to go to church and all that.  Plus, the huge yard has so many hiding places for eggs!!  […]

Aimee and Chris invited us up to their house for New Years Eve.  Their parties are always fun, so of course we were in!  Chace already had plans to go to Raymond’s house for a party.  But, they didn’t invite any girls so I asked […]

Life at the Anderson's, Recipe Keepers

FINALLY!  I’ve been trying to get a photo for our Christmas cards for 2 weeks now!  I coerced the family into posing for me once, but we were losing light quickly and I didn’t want to use the flash.  That meant that everyone had to be perfectly still – HA!  Not gonna happen!  Did not happen!  So, what did happen is that I got 2 dozen shots where someone was blurry.  They were not at all happy when I told them we were gonna try again.  The problem is that nearly every day since that day, it has rained or just been so overcast and gray that there was not enough light to get good photos by the time Todd got home.  Or, we had something going on like Daisies or Cub Scouts.  Anyway…..the whole point is that I finally got the kids to cooperate and got some decent shots.  Not 100% thrilled, but decent anyway.  Bailey was a better subject for the photos than the kids were, go figure!  They actually cooperated more for the single shots.  Notice what Caeden has in his hand though, so typical. 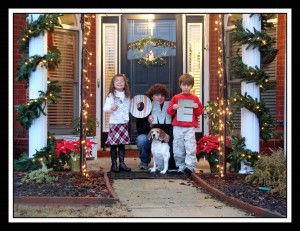 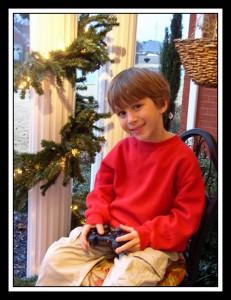 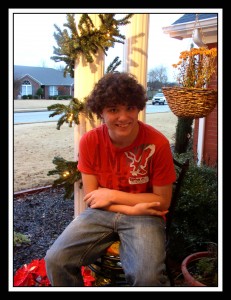 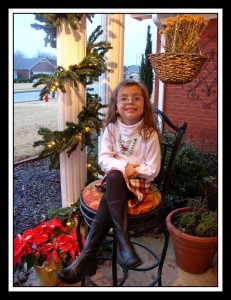 Life at the Anderson's, Photography

Aimee invited the kids up to her house after school today to decorate cookies.  She had already made them the day before with Poppy and Jamie but ran out of time to decorate them.  The older kids got home from school, so she thought she’d […]

Life at the Anderson's, Party Time

I had so much fun decorating for Christmas this year. Todd said that I was like a little girl, so excited. It’s true – it was fun. Most of our things had been in storage for so long, that with each new box that I […]

We’ve had our pumpkins for weeks now.  But, somehow we almost let Halloween slip up on us without getting them carved.  We finally brought them inside to carve the night before Halloween.  Caeden and Lael both picked out their designs after much, much discussion and changing of the minds!  Caeden chose a bat, and Lael chose a cat.  Scooping out all the gunk was a chore, as usual.  Caeden was pretty good about getting his hands down in there and dirty, but Lael was not thrilled at the prospect.  Todd started helping her, and that was all it took.  After that she became more of the manager, rather than the scooper/carver.  Caeden didn’t want any help.  It was taking him forever, so I finally convinced him to let me scoop out the insides.  Then the carving started and he really did not want any help.  He really did do most of the carving completely on his own, I only helped a bit.  Lael was still acting in a managerial capacity.  If you asked her, she would tell you that her job was to poke the pieces to make them fall out after Todd carved it. 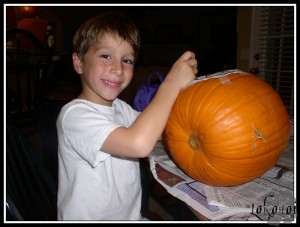 We had the most fabulous party ever!  Yes, it was a lot of trouble, trying to plan it with 3 different people’s input, but in the end it was well worth it!  Catherin, Julie and I joined forces to throw the first ever annual Halloween […]