We picked a wonderful weekend to go to Tuscaloosa.  The weather was fabulous, it was Mother’s Day, so it was nice to celebrate that with Lynda and it the Blue Angels were in town for a show.  Todd’s dad is a county sheriff, and they […]

My parents, my sister and her daughter are in town this weekend. Mallory was supposed to play in a tennis tournament here in Huntsville. But, right after they arrived Heather checked the website to see if they needed to go check in and they had […]

I forgot I never posted this after we went to visit our beautiful new nephew!
I was trying to come up with different ideas for a gift for baby Trey. Of course all new babies need diapers, lotions, shampoo, and all the other baby paraphernalia. Not to mention the big stuff if this is the first baby. But, I wanted to do something a little more personal. So, I came up with the idea of making personalized onesies. I found some plain white long sleeved ones at TJ Maxx and snagged them. Looking back, I should have bought all they had!! Anyway, I bought some transfer paper at Hobby Lobby, then set about creating some personalized designs for the onesies. That was the easy part. The hard part was getting it to print correctly, LOL! I actually wasted 6 sheets before I got it right. Oh well, live and learn. Hopefully, I will remember the next time I try this project. I also found a 3-panel accordian style frame thingy at Tuesday Morning. I did buy several of those because they were such a great price. I altered it and personalized it and left some space for pictures. Ta-Da – Unique and personalized Baby Gifts! 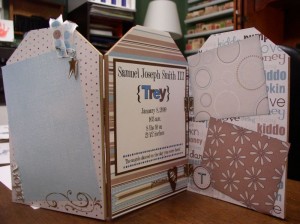 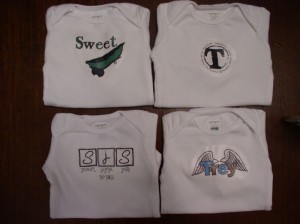 I love Fall Break!  There is talk of Madison city getting rid of the week long Fall Break next year or in the years to come.  I sure hope they do not!  I love having big blocks of time where the kids are off from […]

Traci and Mayson are home from their vacation and they stopped in Tuscaloosa to pick up Rex and to vist.  So, we decided to go down and visit as well.  Todd was supposed to go as well, but at the last minute he got called […]

Heather and her family are already here, so today Mom and Dad decided to drive up also.  The twins had a soccer game this morning at 9:45.  Mom and Dad hopped on their motorcycle and took off from Birmingham early enough to make it in time for the game.  It was awesome, the twins had their own cheering section!!

It is also Dad’s birthday next week so after the game Mom, Heather and I went to the grocery store to get the yummies to make his fave cake – Red Velvet.  We also decided to get some BBQ for lunch.  I thought we would try a BBQ place here in Madison that apparently tons of people LOVE.  On the weekends, the drive-thru is absolutely covered up.  I have seen 12-15 cars in line there on a regular basis.  So, I figured it must be good right?  Well, apparently people here in North Alabama don’t know what BBQ is supposed to taste like.  There are so many different variations of BBQ is it unreal!  This is what one of my faveorite magazines, Southern Living, had to say about BBQ and the South:

As long as there’s been a South, we’ve loved barbecue, the one food that defines us most as a region. It suits our Southern sense of comfort, society, and the passage of time–friends and family gathering around glowing embers, drifting smoke scenting the air and seasoning the meats of animals that grazed the grass of our prairies and rooted the mast of our forests.

That might be a bit over the top, I mean I love meat, I could never be a vegetarian, but I don’t really want to think about these animals roaming around the woods behind my house and then eating them for dinner.  :l

Anyway, back to the topic – BBQ at this place was weird, different and not good.  When she gave us the container, it didn’t look like the 2 lb. that we had ordered.  She confirmed that is was.  We decided that would not be enough, so we got another container.  Then we asked where the sauce was, she said it’s mixed in the BBQ.  REALLY?!?!? :hmmm Where???  There was certainly no sauce there that I could see.  So, we got the meat home, and I dump it into a pan to doctor it up with some ‘real’ BBQ sauce.  The stuff that they claim to be sauce was a clear, vinegar base type that just was not good IMHO.  The actual meat was not that great either.  So we have striked that particular place off our list.  There is one great place here, but it’s not in Madison – it’s out in Limestone county, feels like the country, but in reality only about 15-20 minutes away.  It is called Greenbriar Restaurant. This is the real deal, Southern BBQ like I am used to. They also have the best hush puppies I’ve ever eaten.  They bring a basket to the table when they bring your tea, and they just keep filling the basket up when it gets empty.

We always have to find a BBQ restaurant wherever we are.  It took a long time in upstate NY, but we finally did.  It was called Everglades.  Which is very strange considering after we left NY, we were practically living in the Everglades.  In FL, we did find a place, but I cannot remember the name of it.  I don’t think we were in Charlotte long enough to settle on one.  In Tuscaloosa it was Archibald’s, yep – most people erroneously believe it is Dreamland (which is good!), but Archibald’s is better.  Ifound a funny review somebody did about Archibald’s here.  In Birmingham, it has always been Full Moon.

Yay!  We are so excited the Gilmer’s are here to visit!!  They arrived yesterday.  The girls are out of school for Fall Break so they decided to come visit.  Today we went to the Space Center.  My kids went to school this morning and I […]

Family Visits are the Best

Traci and Mayson came back to visit for a few days. It is so fun having a baby in the house again. Mayson is such a doll, and I guess I can’t really classify her as a baby, she is definitely more toddler than baby! […]

Whoo-hoo…..it is summer! My most favorite time of the year, well maybe except for the weather!! I love it, I just wish it weren’t so blazing hot all the time. Oh well, that’s what I get for living in the South, I suppose. At least we have a pool we can go to anytime we like now. I am loving that……..that was an awesome bonus surprise when we bought this house. A pool in our neighborhood!
This summer is shaping up to be busy and fun. We spent Memorial Day in Birmingham watching my nieces play tennis. I was terribly uncomfortably hot, just sitting there watching them – I can’t imagine how they played! Chasing tennis balls in the heat is not my idea of fun. But, I did enjoy watching them!! Last weekend we went camping at Lake Guntersville State Park. We had so much fun – it was a wonderful place to camp. I think we had the ideal campsite. We were in the primitive area, so away from all the RV’ers with their flat-screen TV’s and anti-gravity pool lounging chairs. Our site was right on the water, and there was a small sandy area, so the kids could build sandcastles and play in the water, and we could watch from the hammock, sweet! Next week we are heading to Baton Rouge. Todd has a business trip, so we are tagging along. Well, actually, he is going to go ahead of us, and we will take the train down a few days later. The train ride in itself will be an adventure, but I am sure there will be plenty to do once we get there also. I just need to google Baton Rouge and see what fun awaits us!

Life at the Anderson's
Next Posts