Caeden’s Cub Scout troop planned an ice skating event. They said that siblings could attend, so of course Lael was all in! Caeden would rather die than attend a Girl Scout even, but Lael is always up for a Cub Scout event. It’s not because […]

Caeden has been in Cub Scout Camp all week this week. He started out on Monday not liking it much – he said that it was too hot, that he didn’t have a lot of fun, and that he didn’t know anybody in his group. […]

Our Cub Scout troop had their Pinewood Derby about a month ago. Caeden was very excited about his car. He and Todd made it look like a Wii controller – and it is awesome. However, it was not very fast. So Caeden was kind of bummed. But then they started calling out names that won in the “Looks” Category. He was sooooo thrilled to hear his name called. So, his car along with the others chosen from our troop went on to the district level. It was at the mall today and wow, it was a huge event. I don’t know how many entries they had, but it was a LOT! Caeden’s car was entered in the Looks only category, so it did not race at all. He wanted to race it – but forgot about that when they called his name for a door prize! He won a free ticket for admission to the ice skating rink in Huntsville. So, he was very excited. Lael was more interested in shopping – she kept asking to go into that store, or that one, or hey, what about that one on the upper level???? such a girl!
Here is Caeden with his car – and then one of a bunch of the cars, his is on the bottom row, 5th from the right. 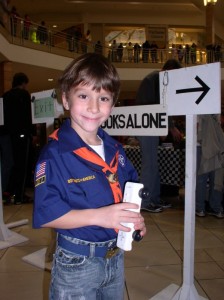 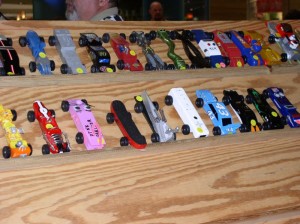 The Blue & Gold Banquet is a big deal in Cub Scouts.  This is the time when the entire troop comes together for a dinner and awards ceremony.  Our troop is rather large, someone said that we actually need to split up into two troops.  […]

This is the first Saturday kicking off our Busy Season……..otherwise known as Baseball Season. Chace had a Intra-Squad game today, supposed to start at 10:00. Of course that did not happen, it was more like closer to 11:00. There were no umpires or anything, mostly […]

Caeden’s Cub Scout Troop was supposed to be in the Parade at the Madison Street Festival. So, the boys had to be there early to get in line.  Chris, Todd and the boys went on early, and Aimee, Lael and I drove over a bit later.  When we got there, we found a good spot to watch the parade go by and waited.  Todd called to tell us when to start looking for them.  Finally, we see the Cub Scouts.  They are easy to spot in their uniforms with the flags.  Dylan was pushing some sort of wooden car thing, with another kid riding in it.  Todd and Chace were all the way on the other side from where we were, so I didn’t get any good pictures of him at all 🙁   Oh well, there is always next year.

The parade goes on by, so we decide to walk around and check out the booths.  It seems like every clown,, beauty queen and all the booths are giving out balloons, so Lael has several, in different colors.  She spots a booth down the road a bit that has blue balloons and insists she needs a blue balloon.  Sure, no problem.  We walk up to it and I realize that it is a Democratic party booth and the blue balloons are emblazoned with some Democrat’s name who is running for Congress.  Aimee starts laughing, since she knows our family’s political stance, (Republican) in stark contrast to her own Democratic leanings.  Lael is just excited about a blue balloon.  I am not about to make the child cry by telling her that she cannot have a blue balloon for political reasons!!!  But then the guy asks her if she wants a sticker.  She is a child!  Of course she wants a sticker!!!  Now, Aimee is really laughing – it is sticker with a donkey, which Lael thinks is cool.  Whatever!

Finally, the boys return and we head over to the Inflatable Fun Zone!  Oh boy, they have 6 or 7 inflatable things, sounds like too much fun right?  I head over to the table to get tickets.  I was not prepared for $1 per ticket.  1 ticket earns you one time down the slide, or one time through the obstacle course, or even better two tickets for the biggest and best maze like obstacle course inflatable!  I thought it was a racket, but what can you say?

After that, we head back out to the street to see what else there is.  My stomach is rumbling, Aimee and I decide on gyros.  YUM!  I don’t think I’ve had one like that before.  She gave me the choice of chicken or lamb, I didn’t have a clue, so I got a taste of each.  Lamb was delicous, chicken was a bit dry, so-so.  Lamb it was – and it was humongous, and sooooooo delicious!

The whole morning was great – the street festival was nice, the kids had a blast!

Caeden is now officially a Tiger Cub.  When we first talked about it – he was excited, sounded like fun, he wanted to do it.  Then the day of the first meeting arrived and he declared he did not want to go.  That is just […]