I’ve been crafting like crazy over here. I want to pack as much stuff as possible into my little space at University Pickers. I want people to walk in and just fall in love with that special something, or somethings! I love those booths that […]

Since I ran out of time yesterday getting my booth set up, I came back today to add some more pretties. A lot of this stuff was left over from an older craft booth I had at another store with a few new things I’ve […]

I’m starting a new venture and I’m so excited about it!!! I will now have a craft booth at University Pickers, one of my absolute favorite stores. If you live in the Huntsville area, you are in luck!  This store has the best of the best crafty goodness in town. It is full of wonderful vendors who put their heart and soul into everything they make to sell. It has items ranging from the coolest furniture, hand-sewn clothing and accessories, things re-purposed from vintage finds and more – WAY more. If you have never been, go NOW! I guarantee that you can find something that will look perfect in your home.

I am working on getting my Booth stocked. I still have a lot of stuff to go on the pegboard and have a few more ideas to make it pretty too. If you are lucky enough have a craft booth somewhere, please share your link in the comments.  I love to look at other’s ideas for their booths. I have a Craft Booth Pinterest board devoted to making the best, most beautifully stocked booth, take a look if you’re interested.

Another Pinterest Project completed!  I’ve been pinning stuff for so long I think I could do a craft or recipe or something every day for the next 10 years and still not do it all from my boards!  I think Pinterest in the bomb! This […]

I found a couple of canvasses (is that the correct plural spelling for canvas??  hmmm, looks strange!)  Anyway, I found them at a local thrift store a few days ago.  They were already painted on, but hey they were only a quarter!  A quarter, I […] 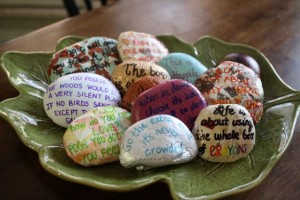 I have a huge collection of Life Truths at Pinterest.  My master plan is to create an Art Journal with a page dedicated to each of these quotes that I collected.  I love quotes, they are the perfect way to sum up great words to live by.  I also wanted a way to display a few of my favorites around my house.  So, I started picking up large, fairly flat rocks here and there.  I got a bunch last week at the lake that finally gave me enough to start my project.  First thing to do was to wash the rocks!  The rocks need to be free of dirt and mud before they get prettied up!  Some of the rocks, I just spray painted, others I used some scrapbook paper scraps and mod-podged them.  Next was to use my fine-point Sharpies and try to write neatly enough for it to be read and space the words so that they whole quote fit on the rock.  That was pretty hard actually – one of them I had to use my bleach pen on it and start over!  This was a great, fun easy project and I adore how they turned out!  These are the quotes I chose for my rocks.  Try it yourself, and choose quotes that speak to your heart!

The creativity involved in making these just astounds me!  This is more art on display outside the Worship Center at Asbury.

Asbury has the coolest Christian artistic displays!  I don’t know who creates them or who comes up with them, but I love it when we go upstairs to chapel or to the Play Room and there is new eye candy!  This one is big, much […]

I tend to take plenty of pictures of the kids playing their different sports and being active, playing outside and stuff.  But, I don’t want to overlook or make light of their accomplishments in the arts.  Lael especially excels in art and at times Caeden gets upset because her stuff is routinely chosen for display in various art shows at Bob Jones, Panoply or even at Columbia.  He did win 2nd or 3rd place or something in the Reflections contest at Columbia last year and Lael was dumbfounded that his piece was chosen over hers.  It was a lesson in humility.  Anyway, this post is to show off some of all 3 kids artsy pursuits.

First is Chace.  Chace started taking drama as an elective at Liberty in 7th or 8th grade, I can’t remember.  I was surprised that he chose drama.  Chace was one of those little kids was so shy when he would meet new people that he would hide behind Todd’s legs.  It was the cutest thing.  Then as he grew up, he turned into a whole different person – he never met a stranger.  He could talk to anybody about anything.  So, I guess I shouldn’t be surprised that he chose Drama.  Anyway, turns out that this was his favorite class at Liberty.  And he was very good at it.  He and Dylan had a short skit that they took to competition at Bob Jones.  They were chosen along with 1 or 2 other groups from Liberty to represent Bob Jones in the state wide competition at Troy State.  Whoo-hoo, it was a huge honor, and they were so excited to spend a weekend on a college campus.  Here is Chace holding his certificate that they presented him at Awards Day.  I would have a picture of him onstage accepting said award, BUT, Chace neglected to tell us that he was getting an award.  He also started taking Art as an elective this year, 2nd semester.  He said the class was ok, which translated means, that it wasn’t too hard, and the teacher wasn’t too mean.  This is one of his art projects.

Next up is Caeden.  Caeden does not care for art.  He will draw something for an assignment but that is about as far as it goes.  He doesn’t have a lot of interest in sitting at the kitchen table coloring, or painting, or any of that.  I did like this picture he brought home from Art class one day though.  His style is abstract – this piece is open to interpretation!!  Also here is a sample of his writing. 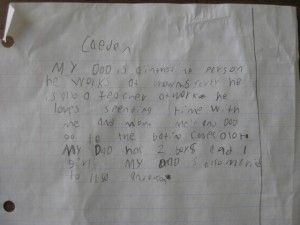 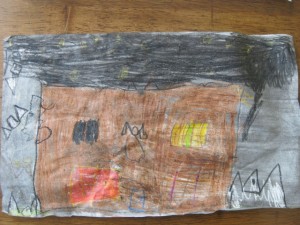 Finally, Lael – the self proclaimed “Artist”  In fact, being an artist is her life’s ambition.  Of course I worry about that, I mean what are the percentage of artists who actually make money and are ‘successful’ at being an artist?  Oh well, she is only 7, I’m sure her life’s ambition will change a few more times before she has to declare a major!  Here is a picture of Lael holding up her award and the art piece that was chosen for display at Panoply.  I’ve also included a close-up of the art piece because you need to look closely to find her name hiddenin there.  It is pretty cool.  Also, here are some writing samples.  She writes in a stream of conciousness style.  Whatever she is thinking about, that is what comes out on paper.  While she was filling out these questionairres for Star Student, she was eating a cupcake.  On another one, she had been helping me grate cheese.  Then I’ve also included a couple of other art pieces that I like. 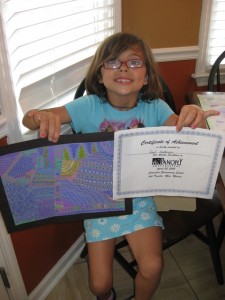 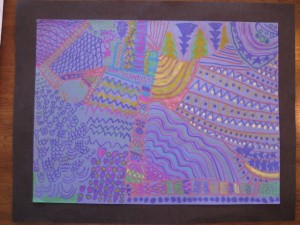 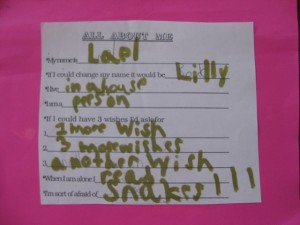 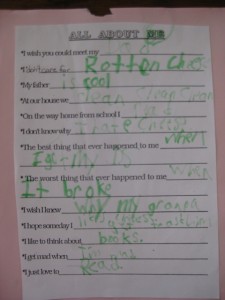 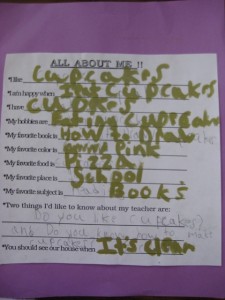 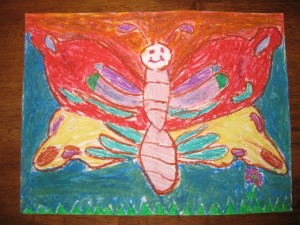 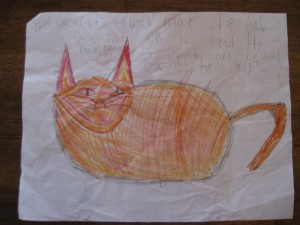