The lake house is and will be for a while, a work in progress.  It is wonderful and is going to be so much fun this summer, but there is still a lot of work to be done.  This weekend at the lake, I got a picture of the hall bathroom that Heather and Shaw did a complete makeover on.  The bathtub that was in there felt like it was going to go right through the floor when you stepped into it.  So, they just ripped the whole thing out, expanded the area a bit and tiled a new shower.  It is awesome! 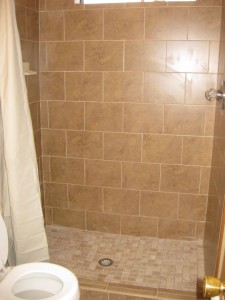 For the kids bedroom we bought bunkbeds.  The room is just big enough to hold 3 sets of bunkbeds, which gives all the kids a bed, plus one extra.  They have been working on putting the beds together, and this particular one was giving Dad fits.  He had to call in support.  I thought it was funny that it was taking 5 people to put one bed together, so I had to snap a picture. 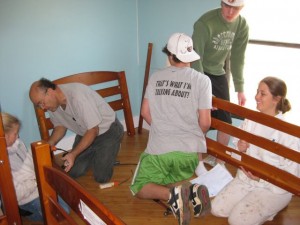 I have been working on powerwashing the crud that has built up on the sidewalk and seawall for the last decade or so.  I don’t think that the people who owned this place before us did any yard work or any work on the dock and seawall.  I love to powerwash, it is so satisfying to spray the gray away, or in this case, the black gunk!  Here is the seawall, and you can see the line where I stopped powerwashing, it will be way underwater in the summer, so you won’t be able to see it then. 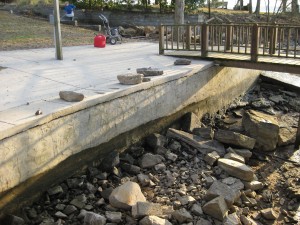 Last picture is one of a tree trunk that Chace and Dylan drug in from the lake.   It was just floating along, and they wanted it to compete with the one that Mallory towed in a few weeks ago. 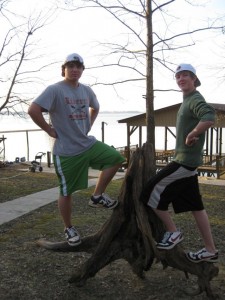 The Smith’s at the Lake