We were out and about this afternoon and decided to stop at this short trail that runs right beside a small lake in a wonderful neighborhood.  Poppy is on a run to get 100 caches in 100 days, so this trail was perfect.  4 caches on a relatively short, easy walk, what could be better?  The trail begins right beside two beautiful houses and if it were my house I would not be crazy about people traipsing around that close to my house – but I guess they don’t mind since they bought the house!

We started off along the trail and came to the first cache which the GPS said was about 300 feet into the woods off the trail.  The problem was the terrain became very steep right off the trail.  Not a problem for geocachers though – we just plow straight in and try not to slip on the mounds of pine straw!  We were successful in finding the cache!  Score!

We continued along the trail and looked for another geocache off the trail again – but were NOT successful this time – BOO!  At the end of the lake the trail wound around back toward the neighborhood, but the GPS was saying – No, keep going!  More geocaches ahead…….Not to worry that the nice paved walking trail around the lake turns into more of a hiking trail through what looks like complete wilderness even though we could see houses up on top of the ridge.  Caeden decided he needed to bring out his inner child and roll down the hill that was acting as a dam for the lake we had just left behind. 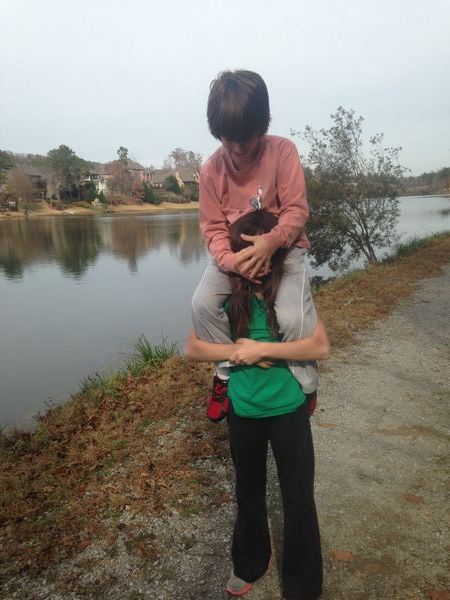 Somehow I managed to convince Caeden to let Lael try to carry him on her shoulders.  She was able to do it, but he was embarrassed and didn’t want me to take a photo.  He figured that if he covered up her eyes no one would know it was her!  Ha!