Caeden is now officially a Tiger Cub.  When we first talked about it – he was excited, sounded like fun, he wanted to do it.  Then the day of the first meeting arrived and he declared he did not want to go.  That is just Caeden’s aversion to going anywhere.  He is such a homebody!!!  Anyway, we convinced him to go, that it would be fun.  We were supposed to cut out some pictures from magazines of things he likes to take to the meeting.  So, we sat down with a bunch of magazines and went to work.  Of course, Lael wanted to help, so she got busy picking out pictures for Caeden.  We sent them off in a ziplock bag to the meeting.  He comes home seriously pumped up about Cub Scouts.  He has the popcorn order form, the schedule for upcoming meetings, info about a fishing rodeo, info about a campout.  You would never guess he was not wanting to go a few hours earlier! He also made something else. Not exactly sure what, but it’s definitely a masterpiece! 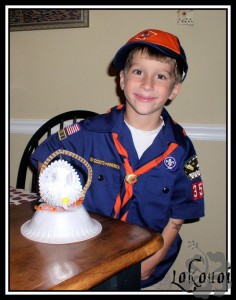