Lael was in the Chess Club at Columbia and always enjoyed the meetings after school where the kids played against one another and learned a bit.  When we got to Rainbow and found they had a Chess Club also she was so happy and wanted to join immediately.  They actually have two clubs, one is Recreation Chess and the other is Competition Chess.  Lael decided she just wanted to play for fun and not compete.  She started going to the Recreation Chess meetings and before long the people in charge asked her to attend the Competition Chess meetings as well and to start thinking about competing in the upcoming Queen’s Quest Chess Tournament that was being held at Rainbow.  She was excited and we added yet another activity to her already overloaded schedule.  As the tournament approached she decided she did want to compete. 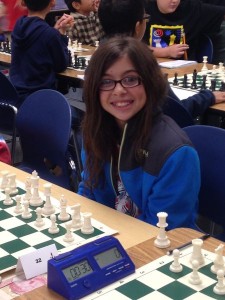 The day of the competition we arrived at Rainbow bright and early as I had signed up to help monitor the playground if there were any kids who wanted to play on it.  I was astonished at the number of people who had already set up camp in the lunchroom!  They all had chairs, coolers, blankets and a myriad of things to keep themselves busy as they sat there ALL day while their children were competing.  One lady even brought her sewing machine and set it up!!  I confess I was not prepared for that……I didn’t even think the parents would stay for the whole thing.  I mean you can’t even watch your child compete!  They all go off into the rooms where the chess boards are set up and a curtain is drawn over the window, they take these chess tournaments seriously!  Caeden stayed with me for my shift at the playground and then started to get antsy – I knew he wasn’t going to last long.  I ended up driving him home and then driving back and forth between our house and Rainbow four more times to make sure Lael was ok! She ended up not doing very well against her opponents, but she she still had fun