Last day in Chattanooga – We had planned on going to the Children’s Museum. But, Todd thought that he would be finished by 10:30, so I decided we would not have enough time to dedicate to the museum. Lael was not happy, but I promised her that would be tops on our list the next time we come. We try to do different things when we come – and there is plenty to do in Chattanooga! So, we left early and had breakfast at Chattanooga Cupcakes. YUM! This is the cutest little bakery. They have all kinds of cupcakes. Lael chose her favorite, Red Velvet and Caeden chose his favorite, chocolate. It was not nearly as easy for me! I finally decided on a Key Lime cupcake that was TDF! There was a little squirt of yummy creamy delicious Key Lime flavor pudding stuff in the middle of it and and on the top. I had forgotten how much I love Key Lime pie! I think Caeden was more impressed with his IBF root beer than his cupcake! They were so huge that even Lael had a hard time eating all of hers.

After we left there, we went in search of a bookstore, Lael wanted to spend the last of her money on books. We went into one that was a disaster! It was like a flea market type of bookstore full of old dusty books. Lael was impressed with a Nancy Drew that I swear must have been from one of the first printings in the 50’s!! She had already read it though. So, we left and went a little farther and found another book store. This store only had about 20 kids books though, and nothing Lael was terribly interested in. Then they found the candy/toy aisle. This is where it got interesting as Lael tried to add up how much all the stuff she wanted cost and how much money she had left. Trying to get Caeden to pick something out was like pulling teeth though! He was not overly impressed with anything, but finally picked out a packet of silly bands. When we got back on the sidewalk outside the bookstore, I noticed the sign that had Lael’s name all over it. 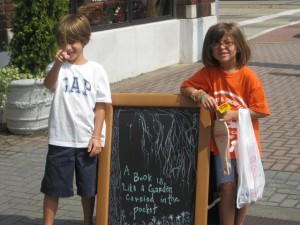 We got back to the hotel and Todd was already there. So, we packed up our stuff, said goodby to Chattanooga and headed back to Huntsville! Next time I will pay more attention though and will NOT miss my turn for Highway 72!

Chattanooga – Day 1
Filed Under: Life at the Anderson's
Chattanooga Day 2
At the Lake