The twins were up pretty late last night because I had promised them that they could swim in the pool, so they were doing that at 9:30! That meant they didn’t get into the bed until about 11:00. Combine a late night with a super dark hotel room and they slept til nearly 10:00! That is a major first! It doesn’t matter what time they go to bed at home, they always get up insanely early! Anyway, we had planned on going to the zoo today. The shuttle doesn’t go to the zoo, so we got the car from valet parking (which the twins thought was the weirdest thing! They could not understand why we had to pay someone to park our car, and certainly couldn’t fathom why we couldn’t go get it ourselves!) We headed out to the zoo and pulled into the parking lot where I realized that I forgot my camera!  Ummmm, no way can I go to the zoo without a camera. So we turned around and went right back to the hotel. They didn’t complain {m.u.c.h.} At the zoo, we had to buy tickets right in the gift store, so Lael starts trying to pick out a souvenir. We always give the kids $10 each to buy a souvenir when we go on trips. Not a lot of money to be sure, but enough to get something cool usually! Lael is a spender, her money just burns a hole in her pocket until every red cent has been spent! I convince her to wait until we leave so that she doesn’t have to carry around the stuffed animal in the park. I am certain that is what she would pick out! We get into the zoo, and lo and behold there is a carousel! Keep in mind they just rode one yesterday! Do they insist on riding this one as well? Of course! The zoo in Chattanooga is not huge by any means, we made the complete circuit in about 1.5 hours. But, it was cheap and a great way to spend ½ a day. 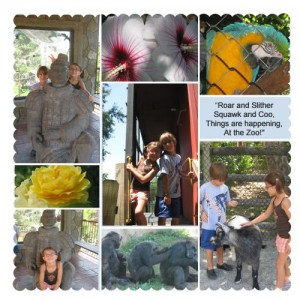 We head back to the hotel to park the car and set out to find some lunch. I was itching for Mexican, and I had seen a Qdoba yesterday as we were coming home from the North Shore. Lael complained that she doesn’t really like Mexican food, but she is the one who ended up cleaning her plate! My burrito was the size of Texas, and after eating most of it my tummy felt like it was holding all of the burritos from Texas. Ugggh! But, it was delicious! Did I mention that I love Mexican?!? When Todd got back to the hotel, we headed out find somewhere to eat dinner, my burrito was still weighing pretty heavy in my belly. But, I am a glutton for punishment. We went to the River City Brewing Co. It looked like the wait was going to be interminable, but we told them we were willing to sit outside and were seated within 5 minutes. Hooray!