Todd had a week long business trip to Chattanooga this week. He always stays at the Read House in Chattanooga  when he goes, which is owned by Sheraton. It has a long history and is a very beautiful old hotel. Luckily this trip was on a week when we didn’t have anything else going on, so the twins and I joined him in Chattanooga on Tuesday night. We had made plans to go the Children’s Museum and the Zoo, so Chace had no interest in doing any of that. He opted to spend a couple of days at Dylan’s house.

We arrived in Chattanooga earlier than I thought. It is not nearly as far as I thought it was. We got into the hotel and up to our room with the appropriate ooo’s and ahhhh’s from Caeden and Lael. There is just something magical about a hotel, especially for kids!! 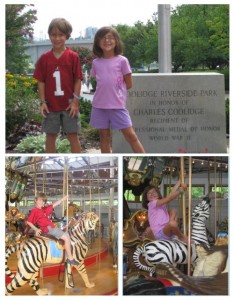 After we got all of our things into the room and settled Bailey in – we took the shuttle up to the North Shore and into Coolidge Park. I had read on the internet that this was a great, free place to spend an afternoon. It was true! The twins loved it all! We started off with a ride on the carousel. Lael had a very hard time choosing which animal to ride on – I think she climbed up on over half of them that were available! Finally, the carousel started and their faces lit up just like it was the first time they had ever ridden a carousel, instead of like the 300th! 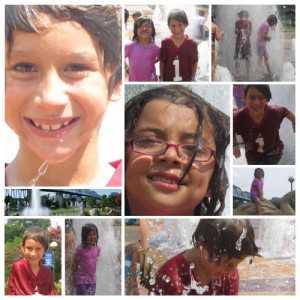 After the ride was over they spotted the water fountains. It was pretty crowded with kids already, but definitely enough water for two more!! It was really hot and some of the kids were wearing swimsuits. I was thinking I probably should have had them put on swimsuits under their clothes, but they just went in clothes and all. I seriously considered joining them at one point, but instead busied myself taking pictures.

I don’t think they would have ever gotten tired of the fountains! I finally pulled them away to explore the rest of the park, but they were not thrilled about it! We walked a bit until we found these cool ‘found metal’ music instruments. These were donated by several Chattanooga companies and installed in the park. Apparently, they used to have rubber mallets to bang with (make music!) but they have gone missing, so the twins just swung the chains to clang, bang, and make a general uproar that they called music. Here is a video of the music instruments and some obligatory posed shots!

We walked on into the park a bit and found this slide type thing that led directly down to the shore of the river. I didn’t know what in the world it was for……..I racked my brain and couldn’t come up with anything. It was made of a heavy duty plastic and had a groove in the middle. Finally I noticed a little sign that said something about canoe/kayak launch. Ah-Ha! Lightbulb moment! The twins liked their first thought of a slide and proceeded to try out that idea. If Todd had been there, he probably would have nixed this idea, those who know him well know why! {safety issues} Lo and behold, he would have been right – check out this video of Caeden sliding down and [almost] taking a tumble that would probably have prompted an ER visit with multiple broken limbs, lost teeth, and missing skin.

A little farther in the park, we found this hopscotch thing that looked like it could provide either fun or frustration, or a little bit of both! The instructions said that you threw a rock and had to skip over the spot that it landed on and that you couldn’t touch any lines. It starts off easy but as you moved through the spiral, it gets quite difficult because the spots get so small. Yes I tried it! 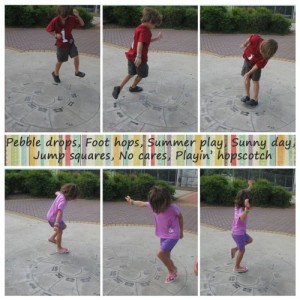 More walking through the park and we spot this humongous hill with a bunch of kids flying down. It looked like it should have been covered with snow, that was how fast they were sliding down. When we got closer we realized that they were sliding on cardboard. There was one piece of cardboard lying at the bottom of the hill, so Lael grabbed it and she and Caeden set off for the top of the hill. I parked myself near the bottom with camera in hand to capture the fun on film and video. When they got to the top, somebody gave Caeden a piece of cardboard also, so they both came flying down the hill. It was awesome. Caeden tried sliding down on his bottom, on his belly, on his knees, he did it all. Lael mostly slid on her knees. I don’t know why the huge hill was made, but it’s perfect for cardboard sliding!

It was getting close to the time when Todd said that he should be on his way home, so we made our way back out to where the shuttle stop was. We were also dying of thirst, so we ran into Walgreens for a drink. We made it back to the shuttle stop and waited and waited and waited. The shuttles in town run every 5 minutes, but not quite so often on the North Shore. So, I called Todd and he said that he was about 10 minutes away. I was trying to tell him where we were – and finally he said oh yeah, I see Walgreens. Just as soon as he pulled into the parking lot, the shuttle came. Of course!