I can’t remember whose idea this new game was…..but it caught on like wildfire.  I think they only started with 3 people, then added another and then another.  The object of the game was for the first person to toss the ball up in the air, the 2nd person to catch it and toss it to the 3rd person and so on….So, Chace was first, Madeline next, then Shaw, then Mallory and ending with Lael.  I don’t know how long they worked at it, but I have 18 previous unsuccessful tries caught on video before this one!

Lael had been talking the big talk about trying to waterski again on her birthday.  Well, her birthday came and went and she chickened out.  Yes, Lael, the daredevil who will do anything – twice – chickened out.  She tried it at the beginning of the summer and got quite a bit of water up her nose and decided that she would not be trying that again.  Caeden didn’t want to try at all.  Then when Lael chickened out on their birthday, he said, Well, I’ll do it!  He tried and did pretty well that day.  I didn’t get any pictures then because I was in the water with him.  Today he wanted to try again, so he did and did well again.  He was able to get up and ski for just a bit before falling.  I think next summer they will both be zooming around the lake when they will be able to control the skis a bit better.

Here is a group shot of the 5 of them after the successful final jump. 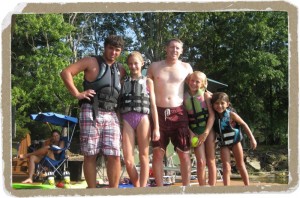 Baseball Tournament Game 2
Filed Under: Life at the Anderson's
Tags: family, lake
Cheap Manual Labor
The Smith’s at the Lake