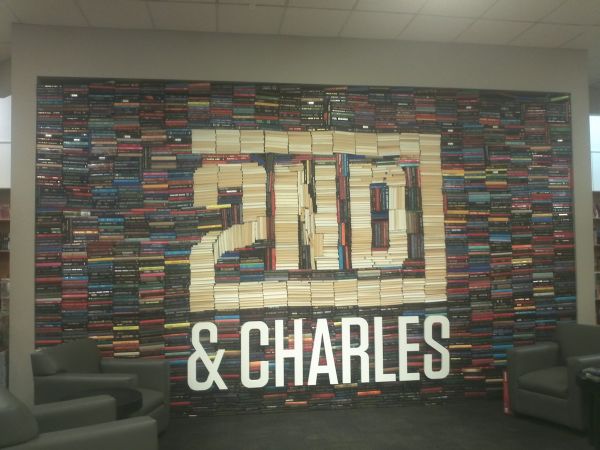 This is a really cool store!  It is in Birmingham, or actually in Hoover.  I have a friend who has been telling me about it for months, that I needed to check it out.  Finally, while we were there for Spring Break we stopped in.  It was a lot bigger than I thought, although I had been in that building many times when it was a Goody’s clothing store.  Anybody remember those?

This store has tons and tons of books, so of course Lael was in heaven.  She roamed around and searched for different books which she only knew part of the important info for.  Like she would know the name of the book, or she would know part of the authors name – Not very helpful!!  She just has so many books crammed in her brain I don’t know how she can keep them all straight.  She frequently reads more than one at a time.  I would be so confused if I tried that.  On a side note, we just got her most recent results of the Star Reading testing.  She tested at a 12.6 reading level.  For those of you who don’t know how these work, that means she reads at a level that the average student in the 6th month of his/her 12th grade year would read.  Ok, wow – I had no idea it was quite that high!

I will say that I wish there was an easy way to find books at the store.  She finally remembered the name of one book, The Cardturer by Louis Sachor.  We found a sales associate and asked her how we might find the book.  She said we had to go to the registers and ask them to look it up for us.  We did that and the guy said nope, sorry we don’t have it.  Back to square one, Grrrrrrr!  At that point we just decided to browse around the section of books that were most like what Lael likes to read…….and guess what we found?  Not one, but two copies of the book The Cardturer.  Really?!?!??  Oh well, finally – she was happy.

Caeden was not quite so happy – as much as Lael loves reading, Caeden does not!  He is getting better though.  Lael finally convinced him to read the Harry Potter and he has been spotted reading more often recently.  But, this store has more than books.  They have video games – Caeden’s arena!!  He picked out one which also made him happy.  Two happy kids = one happy Mom.

Artist in the Making
Filed Under: Life at the Anderson's
Tags: Birmingham
April 2013 Menu
We’ve been Re-zoned