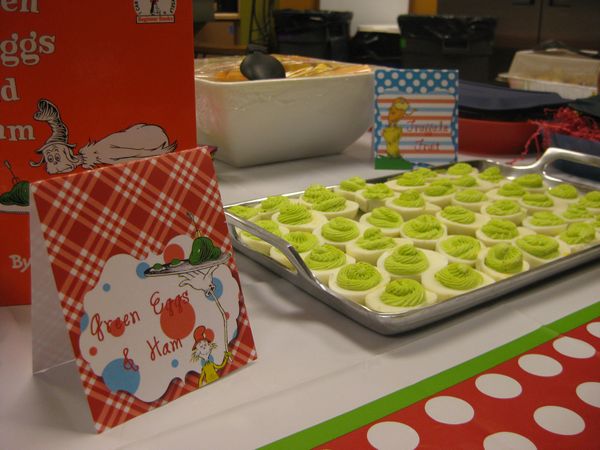 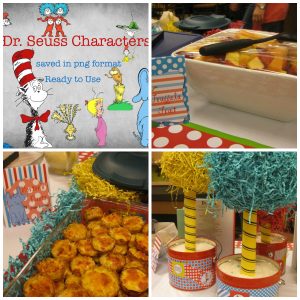 Now, this is the fun part!  The part of planning a party that I enjoy the most – the decorations.  Since this party was not at my house, nor at a friend’s house, I had to rein myself in a bit.  There is only so much decorating you can do in about 1/2 hour and in a pretty huge room at that!  So, I decided to concentrate on the tables.  I found some perfect tablecloths and napkins at Dirt Cheap.  An awesome place for finding deals for next to nothing, honestly dirt cheap!  I think the tablecloths were $1.50 and the napkins were $0.25.  Can’t beat that!  I picked up these amazing red tin buckets at a local thrift store for $0.50 cents each, another great bargain!

After we got the menu ironed out, and I had a list of the food the other girls were bringing – I matched them up with Dr. Seuss names.  This is what I came up with:

For my parties, I always try to pretty up the table by making food label cards.  This worked well for incorporating my re-named Dr. Seuss foods.  Some of them I felt didn’t need explanations, but on some of the cards, I added the ‘real’ name of the food.  You can download my food label cards for free by visiting my Free Printables page.

For the centerpiece we used a bunch of Dr. Seuss books (mostly to fill in dead space, Ha!) but it definitely added a little something to reinforce our theme!  I also made 3 Truffula Trees.  These were supposed to be easy and probably would have been if I had followed directions properly!  I got the idea from Pinterest, of course.  Someone had made them for a different party, but since I had Dr. Seuss on the brain, I immediately thought of Truffula Trees!  The original idea is from Rachael Ray’s magazine.  Here are the instructions:

Ok, so instead of using shredded paper, I used some of the crinkled paper Easter basket grass.  Not the cheap-o generic plastic Easter grass, but the paper kind that comes in a variety of colors.  That part of my deviation from the instructions worked out fine, it was the next part that caused trouble.  I checked Wal-Mart for the styrofoam ball.  I was going to make 3 Truffula Trees.  The big balls, 8″ ones I think, were $9.96!!!  What?!?!  Ummm, no way is that happening I thought!  That will be $30 worth of styrofoam balls!  I decided to go the much cheaper route and decided to use those $1.50 plastic bouncy balls for kids.  You know the ones that are usually corralled in a big display just waiting on unsuspecting parents to walk by and have their kids pluck one out to start asking, pleasepleasepleasecanIhaveaballit’sonly$1.50!!  Anyway, I got two of those and one foam ball that I thought might work too.  If they had more than one foam ball, I would have gotten them instead of the plastic balls and saved myself (and Todd) quite a bit of trouble!
The easy part of making the Truffula Trees was obviously covering the balls with the shredded paper.  I was quite proud of how they turned out.  Then Todd came home and asked how I was going to get the balls to look like a tree.  I turned on my prettyplease voice and said, Oh!  That’s where you come in!  I was originally thinking skewers and had already wrapped 3 of them in yellow/black striped pipe cleaners.  He shot me down, he said they would not work, the balls would be too heavy to balance on top of a tiny skewer and how in the heck was I gonna secure the skewer to the ball?  Why hot glue of course!  He again pointed out that the balls were too heavy for the skewers.  Darn physics!!!  Ok, so Plan B………..He suggested an empty paper towel tube, but decided it wasn’t sturdy enough either.  Hey!  Light bulb moment!  I had emptied a roll of wax paper while I was covering the kitchen table in prep for lots of glue and shredded paper while making the tops of the Truffula trees, it was sturdier than a regular paper towel roll and was about the right size.  I would have preferred something longer, but you gotta work with what you have.  Problem was, I need two more!  For some reason I had 3 rolls of wax paper, so we emptied another 2 rolls just to get the tubes!  Ingenious, right?  Now I have a LOT of folded wax paper……..mental note to self {think of crafty project that required wax paper}  I covered the tubes with yellow scrapbook paper and then found some cool black tape that I had been hoarding in my craft supplies to make the Truffula Tree trunks stripey.
Now, we were in business.  He fired up the hot glue gun and started with the foam ball.  It went together perfectly well and I was in love! Then Todd started with one of the plastic ball Truffula trees.  He put the hot glue on and I heard an awful sizzling sound followed quickly by the sound of air escaping.  Uh-oh!  Not good…….. apparently plastic balls do not like hot glue.  They are not friends!  Todd managed to mostly plug the hole with the hot glue as it cooled but the red Truffula Tree started to droop.  I kinda wanted to cry, but it did not go completely flat, just wasn’t perfectly round.  Ok, I could deal with that.  He was scared to try it again with the other plastic ball Truffula tree, but we didn’t have much choice, I told him not to use as much hot glue.  This one didn’t bust, thank goodness! Last thing was to secure them in the red metal buckets.  Todd used florist foam to secure them and then covered the base with rice.

I used the last of the red metal buckets as holders for ice and serving utensils.  Actually, I didn’t think of that – one of the other girls did.  I just brought them along thinking we could use them for something!  We had a hard time finding a good place for the banner I made.  It wasn’t long enough to go over the table where I had planned it to go, it was too long to go over the door without bumping into people’s heads as they passed under.  We finally decided to hang it on the wall over where our bosses usually sit. Now, for the How-To instructions.  The food label cards, I created in Photoshop.  I found these fabulous digital papers at Etsy, Thing 1 and Thing 2.  It is really not easy finding Dr. Seuss printables.  There are digital kits with the Dr. Seuss colors, but none that included the Dr. Seuss character images, copyright issues I’m sure! 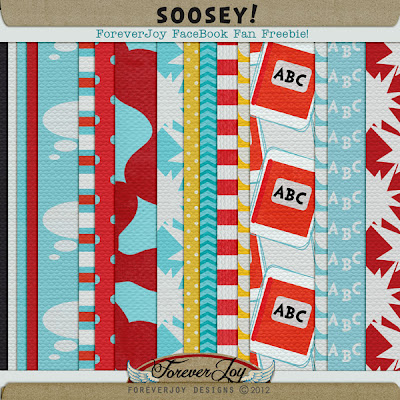 I then turned to Google to find the Dr. Suess characters to add to my food label cards.  I found lots and lots of images, it was hard choosing which ones to use.  Also, I realized that none of them were .png files which meant that I had to edit every single one in Photoshop.  Some of them I also had to alter the colors or even add the colors.  After all that work, I wondered if someone might want to use the characters I found and altered.  If that someone is you, you can download them from my Free Printables page.

The banner I created with a cutting file template from www.thedigichick.com called Banners Set 1.  This would be a lot simpler if I had the Silhouette Cameo that is on my Wish List, but for now I use Photoshop and clip whatever digital scrapbook paper I want to use to the banner, print then cut out.  For my banner, I used “Oh Happy Day” so we could use it for something else besides a baby shower in the future.

I decorated the red metal buckets with some other digital files I found online.  This was a freebie pdf file from this blog, Wanessa Carolina Creations.  She has sooooo many amazing free printables for parties!  You must go take a look!!